National Insurance Rise of 2022: What It Means to Your Personal Finances

The excuse given for this increase was to fund the NHS and (eventually) social care. Or maybe it was PR, to try and soften the blow.

This was a well-trailed announcement and there was predictable public outcry, to try and have the decision reversed. After all, we’re entering the worst cost of living squeeze in a generation. Inflation is expected to exceed 10% at some point in this year.

But Sunak refused to reverse it entirely. However, he did complicate things further by announcing that from July, the threshold above which you must pay the tax would increase. So,  it wasn’t all bad news.

The National Insurance threshold is set to rise from the current level of £9,880 to £12,570, the same as the income tax threshold. So, you pay no tax on your first £12,570 of earnings. That’s a tax reduction in effect, for everyone earning more that the threshold, of £330 per year.

When we offset that against the increases in April, you can see that there will be some winners and some losers. There’s a good summary video produced by Sky TV for a 2 minute 37 second explanation of the National Insurance changes. There will be an ad at the start of this video.

Or head to the Times newspaper’s tax calculator. That helps you see exactly what it means for your circumstances.

Who Are the Winners and Losers?

In short, when you add the rate increase and the threshold increase together, anyone earning over £32,000 per year, before tax, will end up paying more.

At the lower end of earnings, some 2 million people have been taken out of paying national insurance altogether.

Other people who’ll have to pay more tax include those that pay dividend tax, which went up by the same amount. Also, controversially, those people earning over the state pension age of 67. They were previously not required to pay national insurance, but now do have to pay this health and social care levy.

There’s no escape for employers and the self-employed either, who will also face increases. 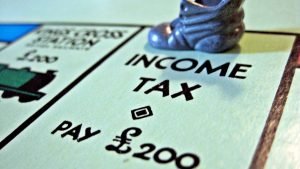 What is National Insurance and Is it Different to Income Tax?

National Insurance is a tax paid on earnings by employees and employers. It’s paid by the self-employed on their profits.

It was introduced back in 1911 to support workers who had lost their jobs or needed medical treatment. Later it was expanded to fund the state pension and other benefits and contribute towards the NHS.

National Insurance contributions are mandatory for people aged 16 or over, up until state retirement age, provided you earn over certain limits (threshold).

Although it’s calculated differently to income tax, and is often linked to social care, it is a form of tax on your earnings. The proceeds of it just go into the general government coffers, despite implications of ring-fencing.

As ever, if you have any personal finance questions or concerns, check out the glossary first. And please don’t hesitate to contact me, any time.

5 Reasons to Maintain Pension Contributions in an Economic Downturn

To maintain pension contributions during an economic downturn can be challenging, but it is an important step towards ensuring a secure financial

Autumn Statement 2022: Impact on my Clients